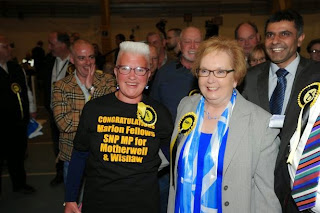 Marion's speech following her election this morning as the new Member of Parliament for Motherwell and Wishaw:


I’d like to thank the returning officer and all his staff for all their hard work not only tonight but also for the past few weeks, to make sure that this election has run smoothly and fairly.


To my campaign team, I thank you for everything you have done. You are inspiring people!
I won’t start to list each and every one of you individually – I’d be here all night - but I will always appreciate the kindness and friendship I’ve received during this campaign. You know who you are.

But there is one member of my campaign team that I’d like to thank personally from the bottom of my heart. My election agent, my husband, George. My campaign would have been nothing without you.

But most of all, I’d like to thank the people of this constituency who voted for me yesterday. Each vote is a precious thing and so it is a privilege and honour to have your support.

Thank you all for placing your faith in me and in the SNP.

Thank you for making me the first ever female Member of Parliament for this constituency.

However you voted, and whatever your views on Scotland’s future, I will represent everyone in this constituency to the very best of my ability.

This election is about making the voice of the people of Motherwell, Wishaw and Bellshill – and the whole of Scotland – heard more effectively at Westminster than ever before. I pledged to be a local champion for our communities, and this is a promise I look forward to delivering.

If tonight I have been elected alongside a strong group of SNP MPs, we will work to put an end to the austerity cuts which are hurting people in communities north and south of the border. We will call for the powers promised to Scotland in the referendum, starting with those which make the biggest impact in getting more people into work and making work pay.

And as part of a string group of SNP MPs, I will always vote against wasting £100 billion on a new generation of trident nuclear weapons of mass destruction.

By ending austerity and scrapping trident we can choose to invest in the things that really matter to the people in Scotland, like our national health service.

In 1945, the people of Motherwell elected the first ever Scottish National Party Member of Parliament, Doctor Robert MacIntyre. I’m delighted to follow in his footsteps tonight.

I am honoured to gain the trust of the people here to be your Member of Parliament.

I promise – I will work hard for you. I won’t let you down.

Thank you very much.
Posted by Marion Fellows at 1:21 PM

I am the MP for Motherwell and Wishaw, elected at the 2015 General Election.